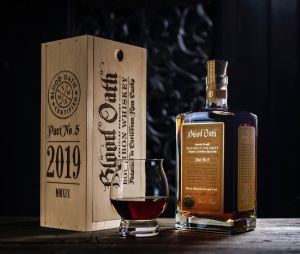 *Sincere thanks to Common Ground PR and Luxco for the sample.

Look, I’ll be honest, as compelling a topic as blood oaths might be, there’s just not a whole lot out there on the subject. At least not a lot for someone doing some rather cavalier googling. Speaking of lazy, it also seems kind of lackadaisical to just rehash and elaborate on one of the blood oaths I’ve already mentioned in previous Blood Oath reviews, doesn’t it? So, in lieu of all that, for the fifth release in this series, we’ll take an exciting look at the origins of the word five.

Our current English word for the numeral that comes after four and comes before six comes from the Old English fif which itself is derived from the Proto-Germanic fimfe which has distant ties to the Proto-Indo-European penkwe-. You might be interested to know that fimfe also serves as the root to the Dutch vijf, the Old Frisian fif, the Gothic fimf, the Old High German funf, the Old Norse fimm, and the Old Saxon fif. I guess this wasn’t as exciting as I made it out to be. On to the bourbon!

Blood Oath Pact No. 5 Kentucky Straight Bourbon Whiskey is, as the name strongly implies, the fifth release in Luxco’s Blood Oath series. Except for the first one, each release has followed this general template: a younger bourbon that’s been finished in a different type of cask, and two older bourbons. Having dropped onto shelves in the Spring of 2019, Blood Oath no. fimfe is made up of an eight year old ryed bourbon that’s been finished in Caribbean rum casks, an 11 year old wheated bourbon, and a 13 year old ryed bourbon. Bottled at a sanguine and body temp-ish 98.6 proof, this bottling once again features some fairly brilliant packaging thanks to David Cole Creative (I copied that sentence from my last review). Stretching the definition of limited edition, this release numbered 45,000 bottles.

The Finish:  Long. Hints of all those sugars hang out for quite a while, but the toasty grains, oak, and peppery spice last the longest.

Thoughts:  Excellent. It would be unfair to say the fifth time’s a charm because all the Blood Oaths have been very good whiskeys, but for me, I think this one has proved to be my favorite. I’m lucky enough to have been able to try Pacts #2, #3, #4 and now #5 alongside each other. I thought #2 and #3 did a very good job incorporating the Port and wine finishing, but here, the rum finishing has been incorporated even more deftly. There’s not so much a rum quality to it as there is a well-integrated layer of complex sweetness. And that sweetness is balanced by the two differently mashbill-ed but no less integrated older bourbons. Definitely a sweeter bourbon, less so an oak forward one, and definitely expertly made. Highly Recommended.

Bonus completist fun! Here’s a breakdown of the composition of the five Blood Oath Whiskeys released so far: