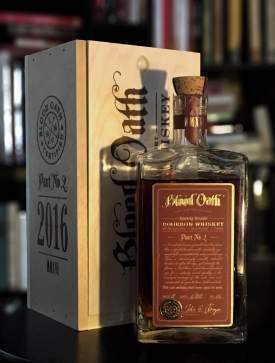 *Sincere thanks to Common Ground PR and Luxco for the sample.

Off the top of my head, I can think of only three blood oaths, one historical, one cinematic, and one musical. Personally, I’ve not yet taken a blood oath, but while I’m pretty sure the opportunity won’t arise, one never says never. Perhaps the most famous historical blood oath is that of some 9th century Hungarians as recounted by an anonymous author known as Anonymous in the marginally reliable codex of Hungarian 9th and 10th century history, the Gesta Hungarorum. In this tome, six leaders of Hungarian tribes swore an oath of fealty to a seventh leader, a guy named Álmos, by filling a cup with their mingled blood, thereby theoretically creating a horrible curse on the one who breaks the oath. Aside from the rather shady naming of the unknown author, and the high prince’s name, Álmos, which is almost Álmost, this seems like a pretty decent blood oath.

Then there’s the blood oath taken by Josey Wales, the outlaw in the movie The Outlaw Josey Wales, and Ten Bears, the leader of the Comanche tribe. By the slicing of their hands and the ensuing messy, possibly disease-transmitting handshake, both agree to live peacefully together. It’s hard to say that this blood oath meant anything as Josey Wales ended up barking at an empty chair at a Republican clown convention and the Native Americans have to suffer their agreements with the government being broken all the damn time.

Lastly, there’s the 2009 album Blood Oath by the seminal death metal band, Suffocation. Admittedly, as much as I enjoy some fairly extreme music, death metal’s just never really done it for me. Suffocation’s been around since the late 80’s so clearly they’re doing something right, I just happen to like my metal blackened, doomed, or drone-y. In any case, I think we can all agree that the term “blood oath” is pretty damn metal in general.

Which brings us to Blood Oath Pact No. 2 Kentucky Straight Bourbon Whiskey. Released in the Spring of 2016, this second chapter in Luxco’s Blood Oath series was created by John Rempe, the company’s creative head and Director of Corporate Research and Development. The blood oath taken in this particular instance is Rempe’s vow to not be bound by any one tradition, any one distillery, and to never divulge from whence the involved whiskeys sprang. No word on whether any actual blood was shed. While I applaud the commitment to creativity, I’m not sure this requires something as dramatic as a blood oath. I’m also not sure that taking such an oath about where your whiskeys come from is necessary. After all, there are only few suppliers to choose from when sourcing whiskey to make this kind of thing, and some of Luxco’s other bourbons might just provide a hint or two. Still, as brand name of a somewhat limited release, Blood Oath works pretty well. Better than calling a bourbon “rhetoric” or something like that, I suppose. The packaging for this one is admittedly quite good: a pine box with wood-burned lettering pinions the square bottle inside, a tax stamp-type seal over exposed cork and a label full of script and a faux-wax seal…it’s a pretty impressive display. Yes, Luxco is mining that retro/vintage/nostalgic vein that’s perhaps too popular right now, but they’re mining it well.

Of course, all the marketing and packaging in the world won’t get too far if what’s inside the bottle isn’t any good. So what’s inside this bottle? Seeing as this one is called Blood Oath Pact 2, it may surprise you to learn that there was a Pact 1. Blood Oath Pact 1 was a blend of three whiskeys; A 12 year old high rye bourbon, a 7 year old high rye bourbon, and a 6 year old wheated bourbon. For the Blood Oath Pact 2, they got a little older and a little funkier. This one’s made up of 11 year old high rye bourbon, 11 year old wheated bourbon, and 7 year old high rye bourbon that’s been finished for an unspecified amount of time in Port barrels. It’s been bottled at 49.3% ABV…or 98.6 proof, which also happens to be a bodily temperature blood likes very much. Clever, huh? The release is a fairly large limited edition as far as limited editions go – 22,500 bottles in all. Luxco has been definitely stepping up their bourbon game as of late with these Blood Oaths, as well as the Yellowstone Limited Edition series, and the Rebel Yell Single Barrel. While they’re proving to be high quality-focused and somewhat creative when it comes to their sourced bourbons, they’ve also been more than willing to test the current bourbon feeding frenzy in terms of price. The Blood Oath Pact 2 clocks in around $100-$120, is it worth it?

The Nose:  A complex yet somewhat compact nose. There are initial notes of cherry pie, blood oranges, and caramel apples with cinnamon along with dark honey, vanilla syrup, burnt caramel, and a touch of maple extract. That sweeter side is balanced by grain, wood and spice. There’s stoneground wheat crackers, fresh rye bread and a hint of corn oil along with rich, dusty cinnamon, cocoa nibs, subtle clove, vanilla bean, ginger, and bit of pepper.. It manages to have lots of wood notes and not be overly woody; polished oak and fresh sawn boards. A very faint, pleasant whorl of charcoal hovers over all

The Palate:  Vibrant, with a slightly creamy, oily mouthfeel. More baked cherries, a little cherry cough drop even, and continued juicy citrus. There’s more honey and burnt maple sugars, too, but the sweetness is leaner than on the nose. There’s also a spicy, toasted rye presence here as well, along with notes of dark chocolate, marzipan, and sticky vanilla bean. The oak comes on strong early with dusty tannins, lots of cinnamon, candied ginger, clove and pepper.

Thoughts:  Really pretty excellent. The sum seems greater than its parts. The influence of each type of whiskey is present; the smooth wheated, the woody, spicy older rye, and the vibrant younger rye that perhaps brings an interesting red fruit and chocolate shading thanks to its port barrel finishing. Each of these elements is integrated and complimentary without one dominating overly much. I found both the nose and palate to be very compact, almost tightly bound. While it was very good and drinkable at strength, I thought a little water opened things up a bit and gave the different elements room to breath. So, an excellent whiskey in a beautiful package…is it worth the $100-$120 price tag? So hard to say these days, on the one hand it is a higher proof, limited edition expression. On the other hand, it’s an 11 year old whiskey at most, there are quality bourbons out there, around the same age, for at least half the price. As impressed as I am with the whiskey and the design, I have to say I think it’s pricey. Still, the bourbon itself…recommended.