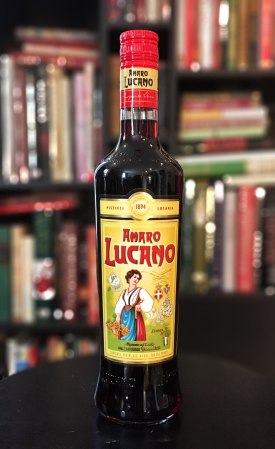 Basilicata is a region in Southern Italy which makes up the arch or the in-step of that county’s boot-like outline. The name Basilicata likely has roots in the Greek word basilikos which might refer to a type of Byzantine ruler, or possibly to the Basilica of Acerenza, an important seat of Roman Catholic power back in the middle ages. Further back, during those fanciful days of Ancient Rome and Greece, the region was known as Lucania, which might take its name from the Latin lucus, meaning “sacred wood.” You can set aside all that Basilicata business for the moment because, as far as this review goes, Lucania is the important point of inspiration.

Back in the late 1800’s, in the small Basilicata town of Pisticci, there was a baker by the name of Pasquale Vena who, apparently, also liked to macerate and infuse different herbs into what was most likely grappa. Casual research does not tell us whether Pasquale was a good baker or not. He was, however, apparently an excellent herb macerater and infuser. By 1894, he had named his concoction Amaro Lucano in honor of that Latin term for his home region and was selling the stuff around town. Vena’s Amaro Lucano quickly grew in popularity and went from being a local favorite right on up to being the preferred amaro of the House of Savoy and a sought after sip throughout Italy. Sales and production kept growing right up until World War Two forced the brand into a bit of a hiatus. In the mid-’50s, the company was in the hands of Pasquale’s sons who had revived the brand and created a new production facility. Popularity and distribution have continued, and today, Amaro Lucano is an internationally-known brand that is still owned by the Vena family.

Currently, Lucano 1894 s.r.l. (s.r.l. being Italian corporate entity speak similar to our limited liability company or LLC.) produces several lines/brands. Their Amaro Classici line includes this amaro, a sambuca, a coffee liqueur, and a limoncello. There are also Anniversario versions of the aforementioned four, the differences being a higher ABV and perhaps a tweaked recipe. Their Limoncetta line has a liqueur and creme liqueur made with Sorrento lemons. The F.lli Vena line consists of a licorice liqueur, a myrtle liqueur, and a Nocino. And, lastly, the company also produces two distinct grappas. While I’m not sure if the F.illi Venas or the grappas are on shelves in the U.S., the other bottles are in varying degrees of availability, with the Amaro Lucano being the most common.

As it seems to be with most herbal liqueurs, the recipe for Amaro Lucano is a mysterious and carefully-guarded family secret. Likewise, as it seems to be with most herbal liqueurs, Amaro Lucano is only too happy to drop a few hints about its recipe and production process to help the marketing along. Lucano is created from a recipe that includes over 30 herbs, botanicals, roots, twigs, what-have-you. On their website, they offer up a few of the star players from this recipe: Artemisia absinthium (common wormwood), Artemisia Pontica (small or Roman wormwood), Clary Sage, Musk Yarrow, Cnicus or Holy Thistle, Bitter orange peel, Gentiane root, Angelica, Sambucus Elderberry, Rue or Ruta, Aloe, and cinnamon oil. All of the ingredients go through, as far as I know, a somewhat unique process in the amaro world. First, the herbs are steeped in solutions of alcohol and water, then heated overnight for even more infusion. Then the mix of herbs, water, and alcohol is run through a hot press to create what the company calls their extract. More “secret” ingredients are added to this concentrated extract, and once the proper flavor profile has been achieved, it is aged in a barrel for approximately five months. After aging, the extract is joined by more alcohol, water, essential oils, sugar, and caramel coloring to produce the finished product.

The Nose:  Floral and fruity with a subtle herbal edge. There’s a raisin-y, almost dessert wine quality, with a bit of tart cherry and orange oil. There’s also a fair amount of root beer – sassafras and birch bark, and a little cinnamon-infused honey. A nice whiff of eucalyptus, a soft floral quality I can’t put my finger on, and hints of dried mint, anise, and cardamom pods.

The Finish:  A lengthy mix of sweet and bitter. Gentian and dried bitter orange peel, sassafras and dried cherries.

Thoughts:  Of the more readily available, sub-$30 amari that I’ve tried, I’d have to say that Lucano is perhaps my favorite. It has a robust flavor profile that manages to do a great job of balancing and incorporating a fruity sweetness and a complex, herbal bitterness. Thanks to that balanced sweetness, this is nicely sippable neat. Over ice, or with a bit of tonic and a twist of orange peel, Amaro Lucano really shines. In cocktails, I think this works well with brown/aged spirits, too, though the complex profile can make it challenging. I particularly like playing with it in equal parts variations of a Boulevardier. An excellent starting point from which to begin exploring the world of Amaro.