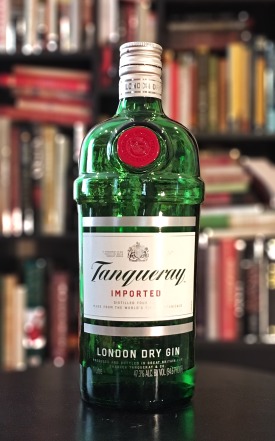 If you’re wondering how a stalwart, classic London Dry Gin got a French-sounding name like Tanqueray, wonder no longer. The distant relatives of Charles Tanqueray, who founded the original Tanqueray distillery, relocated from France to England in the late 1600’s. There…I guess that’s pretty much it. Apparently, these early, ex-French Tanquerays were a devout bunch, and spent the next century in the service of the church. As it so often does, all that clergy-ing eventually took a toll on the younger generations, and apparently drove Charles and his three brothers to drink, or at least drove them to making drink. In 1830, in the town of Bloomsbury, the Tanqueray brothers established their gin distillery. Charles seems to have been the driving force behind the venture, and there’s evidence that suggests that his early product was one of the first, non-sweetened, clean-spirited, juniper-forward London dry gins ever produced. By the mid-1800’s the family “brand” was experiencing  success both at home and as far abroad as Jamaica.

Tanqueray Gin became even more successful at the hands of Charles’ son, Charles Waugh Tanqueray who began work at the distillery in 1867. Charles Jr. quickly expanded the family gin’s export range, and most importantly, oversaw a merger between Tanqueray and fellow London dry gin powerhouse Gordon’s at the very end of the 1800’s. As a result of this deal, the Tanqueray brand was dedicated to the US market, which is still its biggest market today. In 1922, the Gordon-Tanqueray Company was swallowed up by Distillers Company Ltd. (DCL), a little outfit made up of off-brand Scotch like Johnnie Walker.  DCL of course went on to be purchased by Guinness in the ’80’s, which eventually morphed into the huge juggernaut we all know and love named Diageo.

The first major hiccup in Tanqueray’s ascendency came during World War II. In 1941, the distillery was bombed in an air raid and was nearly wiped off the map. One of the only production elements to somehow survive the carnage was an old still, which was repaired and thrust back into service once the distillery was re-opened. In 1948, the brand introduced the now-iconic green bottle, and nearly 10 years later relocated its production, old still and all, to what was called the Goswell Road Distillery. In 1989, production was moved once again, this time to two separate locations. The parent company’s Cameronbridge Distillery had been re-tooled to produce neutral grain spirit* along with grain whisky, so it was now responsible for producing all of Tanqueray’s base spirit. The botanical distillation was moved to a different location in Basildon. Not long after, Guinness wised up and decided to just put the entire production process of Tanqueray, including that battered old still, under one big Cameronbridge roof. And that is where the brand continues to be produced today.

Tanqueray is somewhat unique amongst its peers in that it’s generally known that the recipe consists of only four botanicals – angelica root, coriander, licorice, and of course juniper. The standard Tanqueray London Dry Gin is found pretty much anywhere potable alcohol is sold in glass bottles. The brands line-up also consists of Tanqueray No. 10, Tanqueray Rangpur, and a couple of “limited edition” bottles, Tanqueray Bloomsbury, and Tanqueray Old Tom.

The Nose:  All juniper, all the time. There’s juniper berries, juniper needles, hell, there’s sappy, sawn juniper branches. The suggestion of lemon oil, faintly furniture polish-esque, hangs in the background. Outside of that, there’s candied fennel, and a faintly dusty, woody, herbal note that’s probably Angelica Root. Well in the background, are subtle, barely there hints of coriander and cardamom. There’s also a lot of juniper, did I mention that?

The Palate:  Hottish, and again full of juniper, but less overbearing than the nose. The juniper is sharp and woody on the palate. There’s still a hint of citrus but it’s more subtle.The coriander and fennel, both a little stronger now, are joined by the suggestion of baking spices, cinnamon, ginger, and faint fine ground pepper.

The Finish:  Yep, you guessed it, juniper. There’s also a bit of citrus pith, a little ginger, and a faint lingering hint of that peppery baking spice.

Thoughts:  Well, there’s no doubt Tanqueray and its big, straightforward, juniper-centric flavor profile should be considered a classic London Dry Gin and a veritable pillar of the gin industry. However, for me, the near singular emphasis on the juniper is a bit of a drawback. I love juniper-y gins, but I love them when they have more a bit more depth and varied complexity. To my taste, Tanqueray falls a little short on both counts. That’s not to say this isn’t a well-made, classic spirit, it is, but in this style and in this price range, I think I prefer Beefeater and Bombay Original.

As gin is usually a cocktail spirit, here’s how I thought this one held up in a trio of classic drinks…

In a Gin & Tonic:  Bold , bright, fresh, and crisp. Probably where I like Tanqueray best. Then again, you’d better like juniper-y G&T’s.

In a Martini:  For me, this one is too straightforward, harsh, and overpowering in a martini. Sharp, snappy and strong, a Tanqueray martini is certainly a bold drink, but it lacks a bit of finesse and class in my book.

In a Negroni:  Tanqueray makes a good Negroni, though again, that juniper emphasis can take a bit of complexity away from the other ingredients. The strong ABV and flavor profile create quite a duet with the Campari, but the vermouth can feel a little left behind.

*What the hell is the difference between “neutral grain spirit” vs. “grain whisky” you ask? Neutral grain spirit or grain neutral spirit is basically a distillate made from grain that’s been distilled to such a high proof (at least 95% alcohol by volume) that there’s very little flavor left in it. It’s then used in things like vodkas, gins, and liqueurs. Grain whisky on the other hand, is distilled to a much lower proof, retaining a significant amount of grain character, and being matured in oak casks until needed. Grain whiskies are typically used in blended Scotch as a less expensive, less concentrated in flavor, filler whisky for the old school blenders.