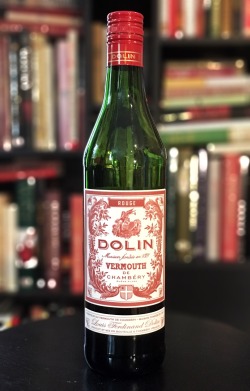 I’m sure we all remember Stage 7 of the 1996 Tour de France, right? That 200km romp through the Alps was one for the ages not just because of who won, the Frenchman by the almost-too-French name of Luc Leblanc, but also because of who lost. Spaniard Miguel Indurain had won the previous five Tours, but on this day, he unravelled in the mountains, dropped right out of contention, and opened the door for eventual overall winner Bjarne Riis. The stage was a quiet, yet staggering fall from grace for Indurain, and, in a way, helped to usher in a new, arguably dark era of cycling.

All that has pretty much zero to do with the bottle we’re looking at here, except for the fact that Stage 7 of the 1996 Tour De France started in the same French town that Dolin Rouge Vermouth de Chambéry is made in…Chambéry. Located in France’s Savoy, Chambéry’s history is closely tied to its region’s history as it was often a seat of power for the House of Savoy. Dolin has a long history as well with the roots of the company going back as far as 1815 and the brand itself being established in 1843. Chambéry holds vermouth’s only protected designation of origin in France and Dolin is, by far, the most widely known representative of that DOC.

Dolin uses a recipe of 54 botanicals and herbs for its vermouths, many of them grown locally in the Alpine region. In contrast to many larger, more mass-produced commercial brands that might infuse a mixture of the ingredients into a base that already includes the fortifying spirit, Dolin macerates the actual plants into its relatively neutral, low alcohol white wine for a period of weeks before adding sugar to sweeten it. After that a grape spirit is added to fortify the aromatised wine. The color for their Rouge comes from a combination of the plants used and the added caramelized sugar. Dolin also distinguishes itself by reportedly using a higher percentage of wine in its products. When Haus Alpenz’ distribution reinvigorated its US market presence in 2009, the brand quickly became popular in cocktail circles. Today, Dolin is still relatively inexpensive – not so cheap as, say, Maritini & Rossi, but not quite so lofty as Carpano Antica – making it a great starting point for exploring aromatised wines and spirits.

The Nose:  A slightly deeper, more complex sweetness than with others in this range. Honey, a little brown sugar, and a touch of Vin Santo. Juicy raisins, chocolate covered cherries, and macerated currants (do people macerate currants?). Along with those sweeter fruitier elements, there’s a balancing floral/herbal quality throughout that gives it a lot of complexity. There’s an integrated bit of quinine and anise and faint hints of clove, allspice and chamomile tea.

The Palate:  Like the nose with its caramel-y, Vin Santo honey. Continued juicy raisins and sticky plums, but more dried fruits as well. The floral/herbal quality is perhaps a little subdued here, though still quite present, with the wormwood and bittering ingredients swelling a little towards the end. It’s hard to call a sweet vermouth dry, but this one has a very pleasant, wine-like dryness towards the end.

Thoughts:  The Dolin Rouge is, in a way, a very compact vermouth, less cloyingly sweet than the really cheap stuff and also less bitter than the more expensive stuff. While there is a deep complexity here, it’s more restrained and subtle. Because of that, it’s usually thought of as cocktail vermouth that happily helps show off the drink’s main spirit. The darker, honey-ed quality compliments brown spirits, and the subtle herbal quality plays nicely, if a little submissively with white spirits. It’s relative bitterness and lack of sweetness makes it a good choice for those that usually find sweet vermouths cloying and simple.