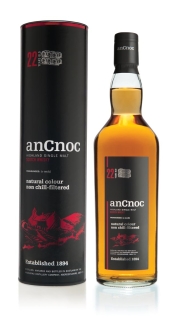 *Sincere thanks to LD of Alembic Communications Ltd. and AnCnoc for the sample

If you go looking for the AnCnoc distillery, you’re not going to find it…there’s no such place. If you go  looking for Knockdhu whisky on your liquor store shelves…you’re not going to find that either. Yet both Knockdhu and AnCnoc exist and are, in fact, the same thing…how is this possible? Oh, the irony (kind of)! The simplified version of the story starts in 1893 which is when Distillers Company Ltd. (DCL) founded the Knockdhu distillery in the rolling, farm-dotted hills of Speyside. In 1925, DCL famously merged with John Walker & Sons (yes, that Johnnie Walker). In 1986, DCL was bought (rather fraudulently, I might add) by Guinness, and in 1997, Guinness merged with Grand Metropolitan to become what is today,  Diageo. Let’s back it up to 1983 when vodka and wine coolers ruled the earth and a global recession made it difficult for DCL to hold on to a distillery like Knockdhu…so difficult, in fact, that they closed it. Luckily, in 1988, Inver House purchased the distillery and still own it today, though Inver House themselves have been purchased by International Beverage. Under Inver House’s ownership, Knockdhu released their first single malt in 1990, but soon after, in 1993, the distillery began releasing expressions under the name AnCnoc. They did so as a result of a “gentlemen’s agreement” with the Knockando distillery to change their name to avoid confusion over the two similarly named distilleries/brands.

What is this Knockando Distillery of which I speak? We have to go all the way back to 1898, when John Thompson builds the similar sounding distillery some 30 miles west of Knockdhu. If there’s any hope at all in keeping this brief, let’s just say that Knockando goes through the typical myriad of ownership changes over the years and in 1972, ends up in the hands of Grand Metroplitan…who then merges with Guinness in 1997 to…form…Diageo. Sound familiar? A nice, tidy, if not somewhat incoherent circle, right? In short, a distillery that was built and then sold by a company that would become Diageo, had to change its name in order to avoid being confused with another distillery that has ended up being owned by Diageo.

Like I said, I don’t even know if that qualifies as irony or just meer poetically silly whisky industry history. Either way, rest assured that distillery bottlings from Knockdhu are now only found under the AnCnoc label. Over the last couple of years, AnCnoc has really upped its presence in the market by increasing its core range to include a 12 Year Old, a 16 Year Old, a 35 Year Old, a yearly “vintage” release, and a couple of no-age-statement collaborations with Scottish illustrator Peter Arkle. The newest addition to the Knockdhu/AnCnoc family is this wonderful 22 Year Old. Aged mostly in ex-bourbon American oak casks with a small amount matured in Spanish oak casks that were “seasoned” for two years with Oloroso sherry. I’m happy to report this one was bottled non-chill-filtered with no artificial color added.

The Palate:  Delicious, creamy mouthfeel, fruity and spicy right away with more lemon – think candied peel and cake icing, juicy oranges, plump raisins, and candied clove. More honey, vanilla bean ice cream, and nutty toffee lead to a wonderful wave of oak, cardamom, clove, vanilla bean, and candied ginger. That Oloroso shows up here a bit more than on the nose adding to the nutty quality and the complex array of spices.

The Finish:  Lingering and still quite honeyed, with more oak, clove, and ginger, dying at the last with a bit of crushed white pepper.

Thoughts:  Man, just a terrifically delicious, satisfying and well-made whisky. Quite bright and lively, yet lush and deeply complex, there’s a wonderful progression and balance from the nose to the finish. The influence from those Oloroso-seasoned Spanish oak casks is very slight and expertly played, mostly just adding a layer of complexity rather than more overt flavors. The lush floral honey from the nose continues throughout the dram, tying it all together and rounding the edges of the spices so it’s all just smooth and silk. Beautiful stuff from a beautiful distillery, very highly recommended.