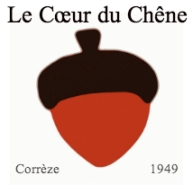 It stands to reason that in this day and age of boutique/artisanal/craft spirits someone would eventually take the leap into boutique/artisanal/craft cooperage as well. What might surprise you is that Le Cœur du Chêne, a new French forestry and cooperage, has actually been around for quite some time, indeed, its mission predates the whole “craft spirits” thing by more than half a century. Located in the Corrèze department of Limousin, Le Cœur du Chêne was founded  shortly after World War II ended by a young man named Jean Pépin-du-Pomme who had returned from his tour of duty to find himself the heir to large railway fortune. Pépin-du-Pomme’s family also owned successful vineyards and as a boy, he was fascinated by both the barrel-makers work and the deep forests of oak in his home region. With his inheritance burning a hole in his poche, he dedicated several years to the study of oak stewardship and of cooperage, and ultimately bought an enormous parcel of deforested land and set about planning the planting of the most ambitious oak farm to date.

Pépin-du-Pomme did not just simply plant trees, he carefully selected the species best suited for wine and spirits maturation and painstakingly prepared the land to grow wood that would help showcase the finest booze in the world. In a large stand of American White Oak (Quercus alba), he carefully combined shredded vanilla beans and organic orange rinds with the rich soil to enhance that wood’s inherent qualities. Likewise, groves of European Oak (Quercus petraea and Quercus robur) were grown in soil that was fertilized solely with grape must from the finest estates. Prior to planting, each acorn was soaked for a period of 24 hours in an emulsion of pure spring water, hand-milled oak dust and Italian passito wine, thereby “super charging” the seed’s growing potential as well as its vanillin and tannic producing capabilities. Pépin-du-Pomme watered each sapling by hand, a process that often kept him awake and walking to and from his artisanal well for weeks at a time. To ensure continuity of purpose, the water he used was also infused with either the vanilla and orange, or grape must that each species required. Initially, Pépin-du-Pomme inspected and cleaned each leaf of his saplings, intending to do so until they reached their harvestable maturity, though it quickly became clear that maintaining such diligence was not only impossible but fairly boring as well.

Unfortunately, Pépin-du-Pomme miscalculated either his health or the many years it takes for an oak tree to reach harvestable maturity. He sadly passed away in the early 90’s having never seen his lovingly tended trees hewn down and coopered into their final purpose. Luckily, his son Jean-Jean Pépin-du-Pomme inherited not just his father’s business but his passion as well, having wandered the beautiful oak groves with his father since before he was a young boy. Until recently, Jean-Jean has been reluctant to harvest more than a scant few trees, steadfastly declaring, “Leur temps n’est pas arrivé!”. However, in the last several months, he has deemed several acres of trees ready, excitedly declaring, “Leur temps est arrivé!”. Trees have been felled and trees have been milled, and as of this writing, oak for more than 400 barrels is drying in Pépin-du-Pomme’s patented outdoor Aqua-Kilns. The revolutionary Aqua-Kiln suspends a lattice of boards above water which simultaneously dries the wood more quickly by virtue of sunlight reflection, and more slowly by rehydrating the wood by virtue of water’s high humidity. In approximately 12- 25 months, this carefully tended wood will be ready for the cooper’s adze. There is no doubting the earnest passion, committment, and heart of Le Cœur du Chêne, but will such meticulous attention to detail and hackneyed science actually help to create a far superior product? Only time will tell if Jean Pépin-du-Pomme’s magical oak garden will bear any fruit.