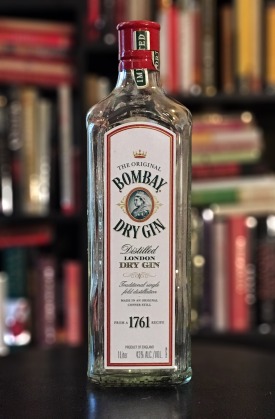 In college, a friend and I had what was probably a relatively short-lived agreement wherein if one of us was in our beloved local bar and the other walked in without realizing the other was there, then the one already at the bar had the satisfaction of buying the newcomer a shot of horrible rail gin. In those days, a shot of rail gin might have cost a dollar and was probably Arrow brand or Phillips or something like that. I’m sure Tanqueray would have been an option, but we had no money for that kind of thing, and besides, the whole point was to inflict pain by forcing each other to quaff sub par booze. The thing is, it never seemed all that torturous to me. Despite outward appearances, I really liked gin, even the bad stuff. And I still really like gin. There’s been something of a gin renaissance in my house over the last year or two, and I have felt a slight twinge of resentment towards whisky for having led me away from this clear, herbal, sharp, coniferous wonderment for many, many years.

So in the spirit of making up for lost time, and of getting a shot of gin when you least expect one, here’s a look at a classic London dry gin, the Bombay Original. Bombay was launched somewhere between 1959 and 1960 depending on the source, but the roots of the brand stretch all the way back to 1760. In that year, a young man named Thomas Dakin built a gin distillery in the UK town of Warrington, which lies between Liverpool and Manchester. Being located near a busy river and trade route helped Dakin’s business get off the ground, but it was the production improvements made by his daughter-in-law that set the distillery on the path to major success. Dakin’s son Edward took over the reigns from his father in 1790, though it was apparently Edward’s wife Mary who was really in charge of the place. Mary brought in a new steam-heated still in 1831 which produced a much purer, less “burnt” spirit and then in 1836, she added a second still. These two stills were outfitted with Corty and Carter heads, which, and I’m simplifying a lot here, were basically pot stills with small column stills on top. These newish efficient still types created a very clean spirit, but also presented the Dakin’s with an interesting problem. Their solution to this challenge resulted in a technique that’s managed to set the gins produced at this distillery apart to this very day.

The problem with the Carter and Corty head stills was that when the gin was initially distilled and the botanicals simply tossed into the pot still, many of the flavorful oils would be cut out, necessitating a costly re-distilling. Instead, Mary and the distillery came up with the idea of putting the botanicals in perforated trays or baskets. This way, the distilled spirit, would rise upwards through the botanicals, picking up those essential oils along the way. While this technique seems to have been used on occasion for filtration, it’s likely that this was one of the first times this type of infusion was used commercially as a flavoring technique. Thanks to Mary’s efforts, the Dakin’s gin was very popular, but by the 1860’s, the family had begun to pull away from the family business. At that time, production was being handled by the Greenall family who were well-respected brewers. By 1870, the Greenall’s had bought the distillery outright.

Fast forward almost 90 years and it was this same “infusion basket” technique that attracted the attention of a U.S. lawyer named Allan Subin. Subin had worked for Seagrams and, as we all do, had a dream of producing a unique gin that evoked the both London’s roaring 20’s and the Crown rule of India. He contracted the production with Greenall’s Distillery, and around 1960, Bombay Dry Gin was launched and quickly achieved success. Sometime in the Eighties, Subin sold Bombay to International Distillers & Vintners, which of course became Grand Metropolitan and then Diageo. Unfortunately, before Diageo was allowed to become Diageo, they had to sell off the Bombay brand (among others) to Bacardi in 1997. In 2005, A large fire damaged the G&J Greenall plant and lit a fire under Bacardi’s bottom line to create their own facility. In 2012, construction was started on the new facility called Laverstoke Mill and two years later in 2014, Bombay’s new distillery officially opened. Bacardi was careful to reproduce the unique still types and production processes which had made the Bombay brand so successful over the years. The G&J Greenall distillery rebounded quickly from the fire and the loss of a major client, and today is the largest white spirits distillery in the United Kingdom, producing many house brands as well as contracted, third party brands.

The Bombay Original London Dry Gin is usually overshadowed by its more heavily marketed, more expensive younger sibling, the ubiquitous Bombay Sapphire. That blue-bottled wonder of marketing gets all the attention. Where the Sapphire has its own website and lengthy articles regarding its history devoted to it, the Bombay Dry just quietly labors on, well-respected but also well under-hyped. Along with the recipe, there are two main differences between the two: the bottled proof (43% for Bombay Dry, 47% for Bombay Sapphire.) and the number of botanicals used. Bombay Dry Gin fills its copper infusion baskets with Angelica root, Almonds, Cassia Bark, Licorice, Coriander, Lemon peel, Orris root, and of course Juniper berries. Sapphire adds two more botanicals to the mix – Cubeb berries and grains of paradise. While gin has exploded in popularity and it seems that every craft distillery under the sun has made a gin or two, the London Dry Style is arguably still the defining style of this spirit. Bombay’s London Dry is a mildly unheralded, though fairly excellent representative thereof.

The Nose:  Very round, almost soft feeling nose. While the juniper is dominant, it’s only just, the citrus zing of the lemon peel and the floral notes of the Angelica and Orris root are strong as well. The other ingredients provide a sturdy, integrated backbone. There’s a subtle, nice buttery quality as well, and hints of damp fabric snapping in the breeze.

The Palate:  Like the nose, this is relatively soft on the palate, with a slightly creamy mouthfeel. The juniper and juicy lemon are still strong here a but in comparison to the nose, the coriander, cassia, and licorice stand out more on the palate. Almond extract, cinnamon, and crushed coriander swell towards the end.

Thoughts:  An extremely pleasing, incredibly affordable, slightly softer, “warmer” London dry gin. I would actually enjoy sipping this neat, which isn’t something I think about doing with most gins. There’s a subtle, almost baking spice quality that comes through on the palate that I love. It’s a solid, well-balanced gin that works well in the classic cocktails. At around $20-$22 a liter, this is great value, and certainly a good place to start if you’re looking for a London dry gin. Compared to my other recommendation for this price range and style, Beefeater, Bombay is a bit more subdued with a lighter citrus and juniper punch and lower ABV.

As gin is usually a cocktail spirit, here’s how I thought this one held up in a trio of classic drinks…

In a Gin & Tonic:  Obviously works well, fairly straightforward and classic feeling, bright and clean. The lower ABV and softer feel makes for a sweeter G&T.

In a Martini:  Quite nice, the quieter profile makes for a less aggressive, spirit-y drink. Bombay is a good one to use if you like your martinis dry.

In a Negroni:  Probably my favorite place for Bombay. Also relatively straightforward, the warmer, earthier spices complement good, complex Vermouths and the depth and strength balance well against the sweet and bitter Campari.

One thought on “Bombay Dry Gin “The Original” – Review”