My incompetence and negligence has afforded me an interesting opportunity to taste two very similar single malts side by side. Towards the end of 2013, The Exclusive Malts released to the US market an 8 year old Laphroaig, distilled in 2005. I received a sample of it and in the heady haze of parenting two small hellions…I sort of lost track of it. Thankfully, I found track of it. Earlier this year, The Exclusive malts released another Laphroaig, also distilled in 2005, this one now 10 years old. Lo, I saw my path for redemption laid out before me like a road paved with peat bricks and staves from re-fill bourbon casks – a twofer.

So here’s a rare look, at least from me, at two independently bottled, single cask expressions from Laphroaig. Both were bottled at cask strength from ex-bourbon hogsheads. It’s mildly interesting to note that, in the glass, there was very little difference color between the two. There was, however, quite a difference in the cost, see below for more on that. 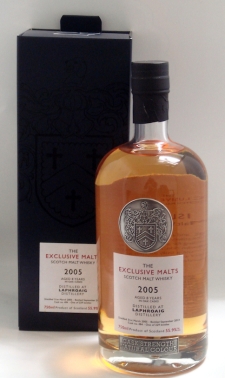 The Nose:  Not quite as medicinal as I usually think of Laphroaig, but Laphroaig-y nonetheless. Initially, there’s Granny Smith apples, lemon oil, and the smoke from burning, oily railroad ties. After that comes subtler notes of briny, dried seaweed, even subtler hints of iodine and rubber. Soft notes of vanilla bean, allspice, and a tiny touch of anise are in the background. With water, a bit more of that Laphroaig peat comes through while the rest is smoothed out a bit.

The Palate:  Sweeter than the nose initially, with bruised green apples now, and Lemonheads candy. The Islay quickly takes over with lots of salty brine and more peat here – more iodine and rubber than the nose. The woodsmoke is drier now, less oily. The spices greener and more youthful: white pepper, coriander, cinnamon with sharp tannic oak. It’s mouth-watering and a little hot at the end. With water,  it’s a little saltier, and slightly smoother, but those spice and wood notes are still a loom large.

The Finish:  Longish, of course. The peat and slightly oily woodsmoke sticks around til the next morning, not quite getting the hint to leave…not that you really want it to. A little bit of white pepper and young grippy oak hang out as well.

Thoughts:  Young, slightly edgy, a little brash, but very enjoyable. With its toned down medicinal notes, this struck me as an ever-so-slightly more approachable Laphroaig. There’s a nice consistency throughout the glass, the shifts in the flavor profile are relatively gentle, not jarring as can be the case with young whiskies. Water helps to tone some of that youthful hyper-ness down, but this remains a fairly upfront, fun, in-your-face whisky. 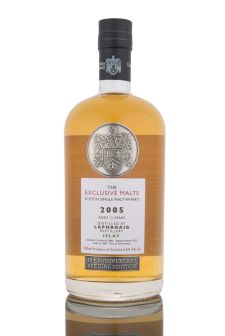 The Nose:  Slightly hotter and more challenging than the 8 year old. There’s lemon furniture polish and crushed apples, with hints of over-ripe pear. The peat shows up more here than with the 8 year old – wet briny sand, iodine, band-aids, and a bit of tar. The dry-ish woodsmoke is more restrained. Clove oil, cinnamon, vanilla syrup hold down the woodspice end of things. Interestingly, water doesn’t do all that much for this one, everything gets a bit more integrated except for those hot lemon solvent notes.

The Palate:  There’s a deeper, more complex sweetness to this one :caramel, lemon curd, and snickerdoodle cookies even. It’s also surprisingly salty. The smoke and peat are well-integrated, with fewer rubbery notes and slightly tarry, oily smoke. The wood shows up in the form of hot cinnamon, clove, grippy rough oak, peppercorns, barrel char. Unlike the nose, water plays very nicely with this palate, bringing it all together, smoothing a few edges, nothing is lost but a little sharpness.

The Finish:  Again, longish…of course. Salty, Peaty, smokey, with mouth-watering tannic oak backing it all up.

Thoughts:  Almost as enjoyable as the 8 year old but in a different way. The nose had a few more challenging notes, but the palate was slightly more tempered, integrated and rich. There was more of a shift here between that hot nose and more complex palate, but it did manage to keep itself together. The salty notes were quite strong, but shy of being too much. Water didn’t help the nose much, but it brought the palate together quite well.

Overall, Wrap-Up Thoughts:  It was a treat to taste these two side by side. The differences were subtle, but present. The Laphroaig character was there in both, but it was interesting to see how each cask shaded that familiar flavor profile. In the end, I preferred the 8 Year Old. Despite its slightly rougher youth, it was a more consistent whisky from the start to finish. The palate of the 10 Year Old was very, very nice, but the hottish, solvent-y nose took away from it a bit. It’s relatively fascinating to think about how small differences in the wood and possibly the cooperage created these subtle variances in flavor.

And then there’s the issue of the price. Back in 2013 when it was released, the 8 Year Old went for around $80-85. That’s a little bit more than what the 10 Year Old Cask Strength distillery bottling goes for, but not really out of line for an independent bottling of a popular distillery. This year’s 10 Year Old, however, is retailing for around $145, which is considerably more than the official distillery cask strength 10 year old…almost twice as much in fact. Yes, there is a certain unique quality to buying independent single cask expressions, and in the 8 Year Old’s case, I’d say its worth it. But though the 10 Year Old is a decent, interesting whisky, I’m not sure it justifies that high of a price.