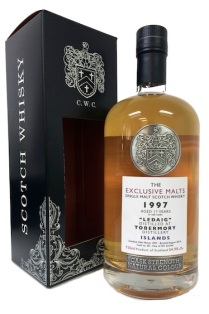 I’m not sure you could ever say that the pronunciation of Scotch Distillery place names was a hotly debated subject, especially for those non-Scots who are just looking for an easy way to correctly say something without breaking their jaw. Still, for every Dailuaine, Glen Garioch, and Allt-A-Bhainne, you’ll get a few differing opinions on how to pronounce them…sometimes from the very people you’d expect to know best in the first place.

Ledaig is another such name and has the added bonus of looking deceptively easy. In a line up of Bunnahabhains and Bruichladdichs, one might breathe a sigh of relief to see this short, simple-looking name on a label, but there’s even a little phonetic curveball here as well. Ledaig is Gaelic (broadly, I’m assuming) for “safe haven” and the place name for the natural harbor around which the town of Tobermory is built. While it looks like it should be pronounced “le-dayg‘“, as far as I can tell, the general consensus is that it’s pronounced “led‘-chig” without spending a whole lot of energy on the “d” and “ch” sounds, adding a bit of “j” to the “ch”, and a little “ck” to the “g” there at the end. Of course, if you poke around enough, you’ll find everything from “led-ching” to “let-chick” to “led-jig” to “le-dig” to “lay-chuck” being touted as the proper way. Safe Haven”, indeed.

To confuse things even further, Ledaig whisky isn’t even distilled at Ledaig distillery. Hell, there isn’t a Ledaig distillery. The Tobermory Distillery was reportedly founded as the Ledaig Distillery, but at some point assumed the name of the town instead of the hard-to-pronounce place name. Today, the Tobermory Distillery makes two types of whiskies, the unpeated Tobermory and the somewhat heavily peated Ledaig. Which brings us to the Exclusive Malts 1997 Ledaig 17 Year Old. This lovely, independently bottled single cask from the Creative Whisky Co. was matured for 17 years in an ex-bourbon cask.

The Nose:  A very nice balance of mature sweetness and savory peat. Apple cider and salted caramels stand out along with barbecue char and smoldering beach bonfire smoke. Subtle notes of toasted marshmallow and malt syrup hover in the background. Vanilla bean, cinnamon stick, faint clove, baker’s chocolate and faint polished oak show off the wood spice influence. Adding a little water tamed the peat and smoke somewhat while adding a little burnt caramel and more spice to the mix.

The Palate:  Nicely oily mouthfeel. An briny burst of smoke leads to more bruised apple and burnt caramel sweetness. After that there’s vanilla nougat with salted nuts and more unsweetened, bitter chocolate. The peat is more earthy than savory now, with a damp, beach fire ember quality. Towards the end, there’s zippy polished oak tannins and greenish spice, ground pepper, ginger root, and allspice. With water, this lost some of its smoke and fire, but gained more hard candy sweetness.

The Finish:  Not quite as long as I expected, but still nice with dusty, yet lively tannic oak, vanilla bean, allspice, and a bit of bbq smoke.

Thoughts:  An excellent whisky. I’m realizing I’m a sucker for good, teen-aged Ledaigs, they seem to hold on to the peat and smoke well, while adding that mature layer of sweetness and spice. This one lives up to that expectation. The sweeter elements here integrate really well with the complex, weighty peat. Both in color and in the dry, spicy heat of the palate, this one does, at times, feel a bit younger than its 17 years, but that added zing also adds another layer of balanced complexity, so it seems a good trade. A little H2O calmed the more savory, peaty elements, while upping the sweetness. As much as I enjoyed it with water (especially the palate), I think overall, I preferred it neat. Definitely recommended.