What better way to get our livers warmed up for WhiskyFest-San Francisco than San Francisco Cocktail Week, which runs from September 21st – 27th. This is the 4th annual installment of the City’s ode to all things cocktail, celebrating it’s storied past (think Pisco Punch, Hotaling’s Whiskey, William T. Boothby,  etc.), it’s craft distillery/locavore influenced present, and it’s bright boozy future. To ensure that San Franciscans remain well-watered, the Barbary Coast Conservancy of the American Cocktail (BCCAC) was established in 2009 by SF Cocktail week founders H. Joseph Ehrmann (Elixir), Jeff Hollinger (Comstock), and Duggan McDonnell (Cantina). Taking its name from the infamous NE corner of the city during the gold rush era, the BCCAC “was founded in order to preserve the Cultural Heritage of saloons and their cocktails in San Francisco, while also celebrating California’s Culinary Philosophy and Tradition via Special Events, Publications, and Educational Seminars.” The three have taken their stewardship one step further by creating the Boothby Center, which holds it grand opening on Tuesday, the inaugural night of the festivities.

I tossed a few questions at H. Joseph Ehrmann so he could better describe the role of the new Boothby Center, and he was gracious enough to take time from making fantastic drinks at his Mission saloon, Elixir, (pouring since 1858!) to answer…

1.  Describe the new Boothby Center, what’s going to be happening there?

The Boothby Center is going to be a sort of community center for the beverage circles. We plan to hold private and public events that focus on the preservation and advancement of our beverage culture in the Bay Area in light of it being part of our greater culinary culture. Classes, presentations, parties and more will happen there. It will be available for rent as an event center with a great bar in it (and access to the best bartenders in town). It will also have office space for rent to small, beverage-focused entrepreneurs and meeting space for all kinds of companies. We’re looking for sponsors all of the time so anyone interested should contact me, because we still need a lot of stuff to complete the vision.

2.  What was the genesis of the center, was it a logical next step from the BCCAC or has this kind of space been a dream for a long time?

We wanted to create a unique space that would serve as a conduit between the industry and the public, for the public benefit. Having a location to call our own means we can call the shots and not have to worry about a bar being open or not or an owners conditions for use of a space. Here we can welcome people all of the time. We’re open to ideas and proposals, and we get to be the filter.

3.  With the (for lack of a better phrase) “artisanal cocktail movement” becoming more and more mainstream and not just limited to a handful of mock speak-easies in NY, SF & LA, What do you see as being next for the cocktail and for the bars serving them?

I think there is still a lot of room for education, thus we have created an education center. For the geeked out, it seems almost old hat already, but the reality is there are still plenty of bars that could use the benefit of more knowledge and there are a ton of people out there with no clue that there is a “movement”. The next thing is being able to get a great drink anywhere, and we want the public to be able to do that.

…and then, because this is a whisky blog:

5.  What’s your favorite whisky to sit and savor neat?

On a regular basis? Laphroaig 10 year cask strength (with a touch of water)

6.  Care to regale us with your favorite whisky story?

Years ago I went to a friend’s wedding in Ireland and to make the journey fun for all who traveled, he rented a bus and did a bachelor party of sorts for  a day by taking us from Kilkenny to the Jameson Distillery with many pubs along the way. What better way to experience Ireland and irish whiskey than a bus full of your buddies doing a bar crawl to Jameson and back? 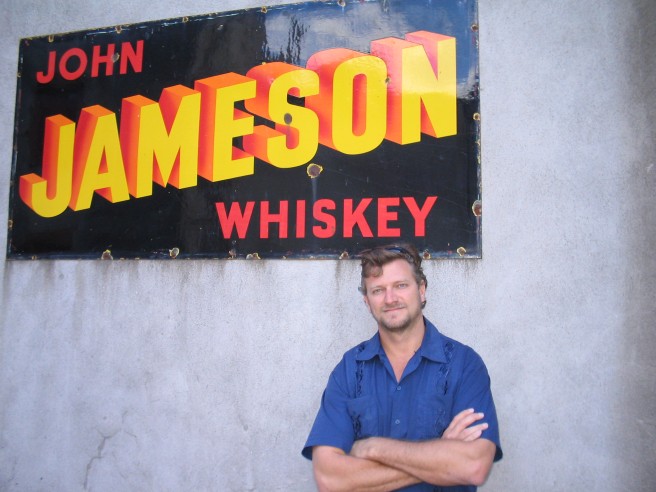