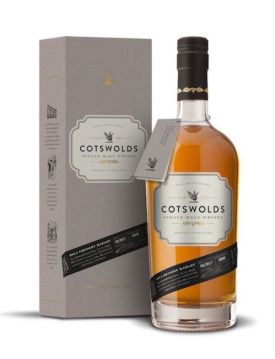 *Sincere thanks to Cotswolds Distillery for the sample.

Founded in 2014 by a former financier, Cotswolds Distillery is located in one of the UK’s wonderfully named “Areas of Outstanding Natural Beauty.” The Cotswolds District is full of rolling hills and charming looking villages built with the distinctive, honey-toned Cotswold stone, an oolitic Jurassic Limestone known to be the most pompous and rudely dismissive of all Jurassic Limestones. From the beginning, it seems apparent that this venture has been well-funded and dedicated to taking its time to do things traditionally and with great expertise. To help get it off the ground the distillery enlisted two Scotch industry veterans, Harry Cockburn, a former Bowmore master distiller, and the late, legendary Dr. Jim Swan.

Cotswolds is refreshingly upfront and open about their sources and their production processes. They’re committed to using only barley that’s grown in the Cotswolds region. The locally grown barley is then malted off-site at Warminster Maltings, LTD. which claims to be the UK’s oldest working maltings. Warminster also does things the old-fashioned way, they still hand-turn and floor-malt all their barley, providing a range of grains for both craft brewing and craft distilling.

Along with their locally sourced ingredients, Cotswold’s fermentation and distillation processes have some out-of-the-ordinary aspects as well. To produce their wash, they uses two strains of yeast and a relatively long fermentation time. Most Scotch distilleries use a fermentation time of that falls somewhere in the range of 48 to 80 hours. Shorter fermentation times are very cost-effective but longer fermentation times are where some truly incredible magic happens. Thanks to a lot of fascinating and overwhelmingly complicated chemistry involving things like autolysis, Lactobacilli, and the Ehrlich Pathway, long fermentation times produce a more complex spirit with a wider range of esters which are responsible for variety of fruity notes in an alcohol.* Dr. Swan helped Cotswolds establish a fermentation time of slightly over 90 hours. The distillery also sets itself apart once the second distilling starts, by cutting from the heads/foreshots to the hearts relatively early in the process, and then cutting from the hearts to the tails/feints rather early as well. When a second distillation starts, the initial spirit, the heads or foreshots, is a harsh, even poisonous alcohol. The heart of the run is when the spirit has the most potable, flavorful ethanol. The tails or feints mark the end of the run, when the liquid becomes hot enough to give off some heavier, unwanted flavors. As distillation progresses, the distiller will run off the heads to be used later, then will make their “cut,” keeping the hearts, and later will cut again to the tails which are also run off to be used later. Cotswolds’ early cut times, in theory, would indicate a fruity, ester-y spirit that’s potentially fairly light.

The Cotswolds Single Malt Whisky – 2014 Odyssey Barley, Batch #2, is the second batch of two that made up the largest release yet for the distillery. The Odyssey Barley part of the name refers to the variety of high-yield, hearty, locally grown barley used. The whisky was aged for a little over three years in a combination of first-fill, ex-bourbon barrels, and re-charred American oak red wine casks.

The Nose:  Definitely a young whisky, though not as rough and hot as one would expect. There’s a taut complexity here and an initially thin sweetness. Floral, almost herbal honey, dried fruitcake fruits, slightly under-ripe stone fruit and pithy orange. Crisp barley notes, both toasted and green, along with almond extract and the snap of damp linen on the line. Not surprisingly, there isn’t much oak, just a subtle hint of sanded boards with a bit of clove, young ginger, and dried vanilla bean.

The Palate:  Hottish, but with a nice oily mouthfeel. This becomes more expressively sweet as it opens up in the glass. Dark sugars and red fruits abound along with spiced orange, weaving their way throughout the palate. There’s also Jordan almonds and bittersweet chocolate, with subtler hints of malt syrup and vanilla. Stronger oak notes than the nose, slightly edgy and tannic, with allspice berries, clove and vanilla bean

The Finish:  A bit of burnt sugar, roasted almonds, ginger, clove and the subtle suggestion of dry, charcoal-y wood smoke(?!)

Thoughts:  While this is young, slightly edgy and hot…that’s to be expected, right? It’s also very drinkable, complex and full of promise. It seems to show off the grain and the distillate more than the oak, which at this point I’d think is exactly what one would want. Initially, it seemed very young and closed off, but with a bit of time in the glass, it opened up and became much more expressive. The subtle green earthiness of the nose compliments the sweeter notes and hiding behind the heat of the palate are some wonderfully rich dark fruit and cocoa bean notes. The palate, I think, is what really won me over with its mouthfeel and vibrant flavor profile. This is an impressive new distillery, and they’re making impressive new whisky, definitely one to keep an eye on. Recommended.