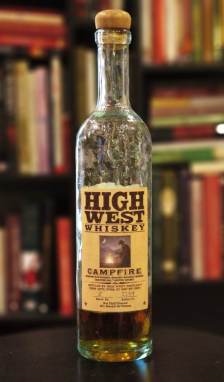 Growing up, the place where I spent a lot of time in the summer had the prerequisite stone-ringed campfire pit, just past the clothesline drooping with swimsuits and towels. The campfire was on the edge of some woods, beech nut and maple trees with wild leeks beneath. Not too far inside the woods, the ground was lumpy and uneven, little mounds and valleys perfect for a boy’s imagination to turn into rivers and islands. On a couple of my favorite islands, I’d carefully transplanted little pine tree saplings I had plucked from even deeper in the woods. I’d eat lunch or a snack there once in a while. I loved it back in those woods. It felt far away, even though I was really just beyond the campfire and probably no more than 60 feet from the fantastic little cottage we lived in.

That campfire pit saw what seems like an endless parade of hot dogs, smoky links, and marshmallows, all somewhat ceremoniously jammed on the ends of sticks. The marshmallows, once set aflame, charred and extinguished usually ended up between two graham crackers with one of those Hershey’s Miniatures, my favorite of course being the Special Dark. The sticks, now released from their food-prep duty, went right back in the fire, so the kids could heat them up and do all kinds of things I now know probably made our parents extremely nervous. One time, my cousin smacked my brother on the upper lip with the glowing orange tip of a stick, giving him a wonderful, though I’m sure very painful burn that looked like a mustache for several days. Or was it my brother who lip-seared my cousin? I don’t remember. The important thing is it wasn’t me who got burned with a red-hot stick.

High West’s Campfire does not remind me of those times since I drank very little whiskey as a child. Part of their core range, Campfire is yet another creative expression from Park City, Utah’s finest distillers and whiskey blenders…perhaps its most creative and impressive yet. Campfire is a blend of three whiskies: a Midwest Grain Products (MGP, formerly LDI) bourbon, a MGP rye (their 95% rye mashbill), and a peated Scotch. Yeah, you read right, a peated Scotch. As far as I know this is the first time an American whiskey-maker has come up with such a “globalized” blend. The bourbon and the rye are both over 5 years old, the Scotch…well, no word on how old that is. No word on where the peated stuff came from either, Scottish distillers are touchy about that kind of thing, you know. If you’re really desperate for info, High West’s official literature does state that the Scotch did not come from Islay…do with that what you will.

Without going overboard on the subject, it’s worth mentioning that High West is continually a beacon of creativity for American whiskey. There’s very little of that coming from the big distilleries – they make bourbon and they make rye. With more and more “craft” distilleries experimenting with mashbills and maturation, the big companies have followed suit and dipped their toes in those kinds of experimental waters, but only just. They’re don’t push the boundaries of what whisk(e)y could be…they push the boundaries of rational and humane pricing, especially on “special” releases, but that’s about it. High West is one of the very few, certainly the only one on such a large scale, that is willing to think of American whiskeys, and non-American whiskeys, as components to be experimented with and combined.

The Nose:  Bourbon? Here. Rye? Present. Scotch…Scotch, anyone? Oh yes, there you are way in the back. A very nice complex sweetness upfront: caramel, butterscotch, crème brûlée, juicy apples and oranges (we’re not comparing), and slightly under-ripe stone fruits. Behind that, there’s floral honey, sweetened café au lait, stone-ground wheat crackers, and rye bread. There are subtler notes of worn oak, nutmeg, cinnamon, and black tea. The Scotch shows itself very discreetly behind all that, mingling with the oak and spices, drifting a very subtle bit of wood smoke…and maybe a little pipe smoke over everything.

The Palate:  Initially, still bourbon-y sweet with more honey, brown sugar syrup, blood orange, and Bing cherries. The rye is more prevalent here than on the nose, herbal and spicy, along with some vanilla bean, malted milk, and nutty toffee. The Scotch looms larger, too, a whorl of peat smoke and wood smoke riding atop the swell of coarse oak, cinnamon, baker’s chocolate, and nutmeg.

The Finish:  Longish with vanilla bean, cinnamon, and caramel. Peat smoke and the spent embers from the previous nights…campfire bloom one last time.

Thoughts:  Hell yes. I’m repeating myself, but what the hell. A rarity in American whiskey, High West proudly wear the mantle of “blender”, and while they’re always creative, it’s whiskeys like Campfire, the ones that are well outside the box, that show just how incredibly damn good they are at their job. This easily could have been an interesting but clunky, disjointed novelty whiskey. Instead, it’s a deftly integrated one where the three styles compliment each other very well. It’s definitely still an “American” whiskey, with the bourbon profile being the strongest, balanced by that heavy rye. The Scotch is less obvious, but it plays its smaller part well. The smoke grows from beginning to end, but there’s also a milky, slightly earthy honeyed sweetness throughout that helps tie everything together. Expertly made, definitely recommended.

*Please note that the Campfire reviewed here is from batch #5. I’m not exactly sure what batch they’re on to now, it’s at least #10.