I know what’s on your mind. It’s certainly not whisky, or the decrepit state of our union, or who will be the starting shortstop for the St. Paul Saints this season. No, I knew what was on your mind from the moment you laid eyes on the title of this post: “Garioch…what in tarnation does ‘Garioch’ mean?” Well, if you know this blog at all, you know that you’ve come to both the right place and the wrong place for the answer to that burning question. Garioch, (pronounced “geery”) is one of the six area committees of Aberdeenshire. Yes, I know, for most of us that clears absolutely nothing up. In Scotland, Area Committees are, as I understand it, basically a sub-level of government falling under the purview of a Council Area. It will shock and alarm most of you to learn that there are 32 Council Areas in Scotland. I shudder to think how many Area Committees.

Yes, you say, awakening from unintended blog-induced slumber, that’s all well and good, but the meaning of the word “Garioch” still escapes us. Fair enough. Garioch descends from the Scots Gaelic Garbh meaning “rough,” and iochd  meaning “howe.” A howe of course being a fairly obscure little word for a hollow or dell or small valley. So the Garioch is a rough little valley, though what made or makes it such a rough place isn’t clear. For all involved, let’s hope it’s landscape and not the inhabitants.

As luck would have it, the Glen Garioch Distillery isn’t even located in the Garioch Area Committee, it’s in the Formartine. That probably leaves everyone wondering if all that above stuff was really necessary. Let’s move on. This independently bottled bottling of Glen Garioch from the Creative Whisky Company’s Exclusive Malts range was distilled in 1995, aged in an ex-boubon cask, finished in an Guyanese ex-rum cask for an unspecified amount of time, and bottled at cask strength over 19 years later in 2015. 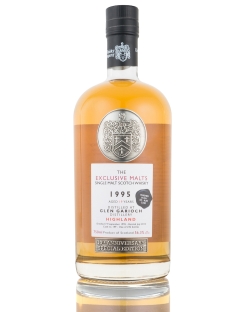 The Nose:  A beguiling nose with lots of sweetness upfront and lurking complexity behind. The sweetness is brown sugar and candy floss as well as malty cereal milk and quite floral honey. Nice fruit notes of canned pear and canned pineapple. Behind all that sweet there’s worn oak, ginger snap cookies, soft, mild clove, cinnamon stick, and just a touch of mint. Tucked further back are savory notes; hints of bbq sauce, dry wood smoke, and a faint whiff of peat. With a little water, the sweet is tamed and the savory brought out more.

The Palate:  Nice oily mouthfeel. Initially, there’s more complex sugary sweetness, brown sugar, malt syrup, caramel, honey, and fruit syrup. There are a few more tropical fruit notes here than on the palate. After that, roasted, salted almonds and baker’s chocolate lead to more wood, spice and subtle peat. The oak is sturdy and grippy, the spice full of tannic clove and cinnamon, raw ginger, and peppercorns. The peat is earthy, not medicinal and seems infused with more dry wood smoke and barbecue char. Adding water calms the strongish wave of wood and spice at the end, almost exquisitely drawing everything out.

Thoughts:  This is an excellent whisky. I’m not usually the biggest fan of rum-finishes, and the initial wave of sweetness on the nose almost had me convinced this was not going to wow me too much. But the slightly subtle, underlying savory and spice complexity of the nose drew me in. The palate was a barn-burner, at first very sweet, then woody and spicy, then savory and peaty, all nicely progressing and balanced. Adding water really made this shine, balancing the nose and palate even more and calming the march of all that complexity. The rum influence is definitely there in the form of all that sweetness, but it’s tempered just enough by Glen Garioch’s somewhat quirky style so that it works very well. Definitely recommended.