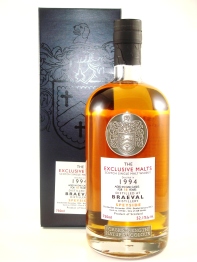 There has never been an official bottling from the Braeval distillery, any expression you find out on the shelves is, like this one from The Exclusive Malts, an independently bottled release. Why? Well, as I’ve mentioned before, Braeval is a newish distillery, built in 1974 by its owners Chivas and Seagrams primarily to serve the needs of their popular blends. Apparently, there has just never been the availability or perhaps the need to put out a Braeval 12 Year old or something like that. Initially, the distillery was called The Braes of Glenlivet, meaning “the banks of the river Livet” or something close to that. In the early 90’s, in a stroke of dubious propriety, Chivas and its parent company Seagrams decided all the other brands using the term “Glenlivet” were a threat to their big-selling Glenlivet single malt and began to organize legal action to force name changes. In a stroke of common courtesy, they decided they better start by changing their own companies’ names before they insist on others changing theirs. So, in 1994, The Braes of Glenlivet became Braeval, which is just as well because to me, Breas of Glenlivet sounds like a golf course not a distillery.

Enough about golf courses. This 18 Year Old Braeval was distilled in 1994 and matured in a refill American oak barrel which yielded 228 bottles of cask strength, natural-color whisky-ness.

The Nose:  A quietly sweet (sweetly quiet?) nose, with vanilla egg custard, caramel and wild flower honey initially. Citrus notes of juicy tangerine, maybe a little pink grapefruit, are right there as well, with dessert-y notes of baked stone-fruit crumble and lemon curd tucked further back. Subtle wood notes belie the 18 years of maturation; polished oak, cocoa powder, and cinnamon & sugar mix. While the addition of water doesn’t unlock any more secrets, it does balance things a bit by toning down the sweetness and playing up the wood influence more.

The Palate:  That shy nose initially carries over to the palate, but it quickly becomes more expressive. Orange-tinged crème brûlée and toffee with roasted salted nuts lead the way. Dark chocolate covered cherries segue into the strong oak influence I was missing from the nose. Dusty tannic oak, vanilla bean, cinnamon stick and hot cinnamon candies, drying clove, and an earthy, almost minty catch towards the end. Like the nose, water serves to balance things out a bit by pulling out more malty-chocolatey richness and toning down the tannic spice just enough.

The Finish:  Quick-ish, oaky with more smooth, hot cinnamon and clove, quite drying and pleasant.

Thoughts:  I quite enjoyed this despite it at first seeming a little reluctant to being enjoyed. The nose seems a little restrained for its age and ABV, it takes a bit of work to prise out its complex sweetness. The palate is a bit more straight forward with the drying spice at the end almost a bit too much. Though I found this very drinkable at strength, water nicely balances out both the subtle nose and spicy palate, and draws out more of the rich 18 year old character I was expecting. A very good, interesting whisky, somewhat expected, yet a little mysterious at the same time. Recommended.