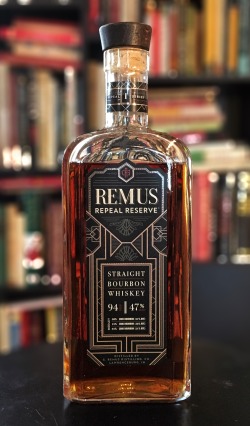 *Sincere thanks to MGP Ingredients and Gregory White PR for the sample.

The “Repeal” part of the George Remus Repeal Reserve refers to the repeal of Prohibition. The George Remus part refers of course to George Remus, the legendary, infamous bootlegger and murderer who made a huge fortune during the early part of Prohibition. By the time Repeal Day on December 5th, 1933 rolled around, Remus had pretty much lost all his money, spent far too little time in prison for a heinous crime, and had re-invented himself as an innocuous straight businessman.

Repeal Day marks the end of a colossal American social blunder. The 21st Amendment to the U.S. Constitution repealed Prohibition’s 18th Amendment to the U.S Constitution. Today, the date has provided alcohol marketers another wonderful opportunity to romanticize an odd, occasionally violent and tragic bygone era in hopes of selling more alcohol. Ironically, there are now probably more than a few people waking up feeling miserable on the Day After Repeal Day wondering if repealing the prohibition was such a good idea in the first place.

The George Remus Repeal Reserve Straight Bourbon Whiskey is the second bourbon released by MGP Ingredients’ George Remus brand. The first, the George Remus Straight Bourbon Whiskey, is the standard widely available bottling, while the Repeal Reserve is a more limited edition. First released at the end of 2017, this one consists of three different bourbons, a “medley” as the company calls it. Half is made up of 2005 distilled bourbon made with MGP’s 75% corn, 21% rye, 4% malted barley mashbill. Another 35% is made up of 2006 distilled bourbon with the same mashbill. The remaining 15% is a 2006 distilled bourbon made with their high rye mashbill which is 60% corn, 36% rye, and 4% malted barley. Some quick math would suggest that this one is made up of 11 and 12 year old bourbons. While that may well be the case, none of the official literature mentions “11 years old” or “12 years old,” instead just focusing on the year distilled. While I do find that a bit odd, I’m going to operate on the assumption that the Remus Repeal Reserve is that old because I just really don’t want to be that cynical or conspiratorial.

The Nose:  A very solid, rich nose. Warm caramel sauce, sticky figs, and orange blossom honey, along with ripe green apples and juicy tangerines. Beyond that, there’s sweet corn and vanilla ice cream, fresh-baked rye bread and a few candied nuts tossed about. The oak is strong but well-integrated – polished boards with vanilla bean, cinnamon candies, and a bit of coolish mint.

The Palate:  Fairly dry and quickly spicy. Some of the sweeter elements from the nose are still around but they’re less sugared – the caramel is now a little burnt, and the fruit a little under-ripe. The rye is much more prevalent here, toasted grain with a sharp herbal, minty quality. Nutty toffee notes and bitter baker’s chocolate lead to more complex oak notes, nicely tannic, with strong cinnamon, clove, ginger and fine ground pepper.

Thoughts:  Very good. This is well-put-together stuff with a complex and robust flavor profile. It does strike me as more grain forward and vibrant than I’d expect from a 11-12 year old bourbon, but this works that grain and vibrancy well. The palate in particular is pleasingly rugged with the strong rye notes and heady bit of oak and spice. I really love this over ice – that oak and spice holds up well and a more pronounced fruitiness comes out. As per usual, I think the $75 price tag is steep for this, but clearly I’ve lost touch with the market as I say that pretty much every review, don’t I? It’s no secret that MGP makes really good whiskey, here’s another really good example. Recommended.