*A sincere thank you to MG and Whiskey On Ice for providing me with the media pass and the opportunity to attend the event as press.

This year’s version was nearly an all day event with masterclasses starting at 1:30 and the last call sounding close to 8:00pm. I’m not ashamed to admit that in the past I’ve tried and failed (sometimes spectacularly) to be a relatively clean-living, responsible adult at events like this, but this time, I think I finally achieved that hard-to-manage, razor-thin balance that allowed me to drink whiskey for 6 hours and still put the kids to bed with an entirely appropriate, even respectable level of sobriety.

But enough back-patting, here are a few somewhat organized, but kind of random highlights…

In comparison to last year’s event, this year’s was larger in a couple of ways. There were reportedly nearly twice as many attendees, including the sold-out VIP hour, but the wonderful Depot space handled the crowd well. Even at the height of the event, it was easy enough to move around, and easy enough to find a place to sit down and collect one’s self. I was told that the number of whiskies poured was not much more than the previous year, but to me, it felt like companies brought a few more expressions and there was a broader range of some brands. That’s, of course, a positive thing, but due to who wasn’t there, there also seemed to be a lot of consolidation – three to four tables in a row featuring Diageo or Beam Suntory brands, for example. I missed seeing Anchor Distilling Company’s excellent portfolio, and would love to see them back next year. I’d also love to see small powerhouses like Impex Beverages and Purple Valley Imports involved. Not only do they both carry well-regarded, slightly lesser-known brands, they also import some independent bottlers. I think more of that kind of thing would add depth to the Scotch category.

There were some welcome additions to the event as well. A silent auction of rare whiskies was a fun diversion for those that couldn’t bid (me), and a worthy cause for those that could, raising nearly $11,000 for the Commemorative Air Force Minnesota Wing. There was also a cigar and cocktail lounge outside, which provided an escape for the clamor inside. The cocktails were decent, unfortunately the aloof, almost laughably self-important bros behind the bar didn’t make for an inviting attraction. I suppose it’s easy to get carried away by “mixology”, but when you’re shilling for a huge company (Diageo) by making sweet-ish drinks out of some of their more average brands…you don’t really have much reason to be smug. In terms of the master classes, I enjoyed the two that attended. Three of the four focused on a broader topic, not just one brand, and I think that’s a good thing. You’re able to focus on a brand during the grand tasting, it’s nice to have masterclasses that tackle a wider topic.

It was interesting to note a welcome, subtle change in demographic as well. These observations are far from socio-scientific but I felt there were more women in attendance this year compared to last. Perhaps not during the VIP hour, but definitely during the regular grand tasting. Along with that, it seemed like there were far more women in charge of the booths. Though women are one the whiskey’s fastest growing consumer demographic groups, and there are more and more women involved in all facets of the industry, the whiskey industry is still generally seen as something of a man’s world, so any shift away from that erroneous stereotype is well worth mentioning.

So, for the second year in a row, a great Whiskey on Ice event. The food and drink scene in and around the Twin Cities continues to grow, and the popularity of this event just goes to show that there is obviously a thirsty market for this here. Word is from the organizers that nearly half the VIP tickets for next year are already gone. That doesn’t come as a surprise. See you there on April 2, 2017. 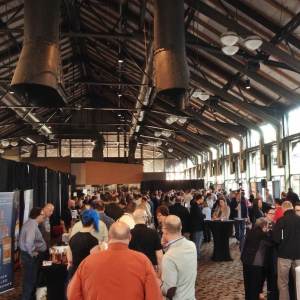