The history of the Ben Nevis distillery is long, marginally interesting, and surprisingly international. It is certainly one of the older Scotch distilleries, having been founded in 1825 by a man named Long John McDonald. Not surprisingly, Long John McDonald is something nearing a legend in Highland history. Long John did not receive his legendary nickname from his deep love of unfilled rectangular donuts. Nor did he receive it for having a masculine attribute that this blog is far too mature to mention. No, Long John was apparently a very tall man, though why people just didn’t call him Tall John is a bit of a mystery. Perhaps one day a number of Johns were lying down out in the heather and when someone came looking for John McDonald, one of the locals pointed and said, “that’s him there, the long John.”

In any case, Long John McDonald founded his distillery in 1825 and ran it successfully until his death in 1856. Long John’s son, Donald McDonald (not the most exciting or creative name ever, but what the hell) inherited ownership and with the help of his sons, continued to operate Ben Nevis until the end of the 1800’s when things started to fall apart for the Scotch industry. The distillery operated fitfully for the first half of the 20th century. In 1941, D.P. McDonald & Sons sold Ben Nevis to an equally legendary British-born Canadian named Joseph Hobbs. Hobbs was reportedly a WWI naval officer, a prohibition-era bootlegger, a failed depression-era stockbroker and developer, and eventually the owner of several distilleries and liquor brands. He decided to install a grain spirit-producing column still at the distillery in 1955, thereby making Ben Nevis the rare distillery that could create all the parts of a blended whisky on site.

Production at Ben Nevis was halted in 1978, and three years later, Hobbs’ son sold it, strangely enough, to Long John Distillers who at the time were owned by Whitbread. The distillery was updated, and refreshed, and began production once again in 1984. Alas, as they were for Bob Dylan, the 80’s were none to kind to Ben Nevis which shut down again in 1986. In 1989, Whitbread sold the distillery to Nikka Whisky Distilling Co. Ltd., who owns it to this day. So there you have it, a distillery founded by a tall Scot, purchased first by a bootlegging Canadian, then some English Brewers, and finally a Japanese company. How very cosmopolitan.

Interestingly enough, reportedly a third of Ben Nevis output is sent, as new make spirit, back to Japan to be used in Nikka’s popular line of blends. The rest is used in the Dew of Ben Nevis line-up of blends, and the standard 10 year old expression. While there have been a few more recent single cask bottlings, Ben Nevis keeps a relatively low profile in the Scotch whisky world. This one, the Exclusive Malts 1996 Ben Nevis 17 Year Old, was matured in an ex-sherry cask, presumably made out of American oak. No word on what type of sherry was in there before the whisky. 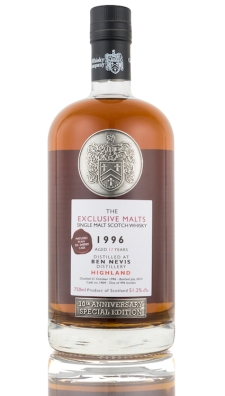 The Palate:  Thinly oily mouthfeel and a bit hot. The fruit is darker now, brandied cherries, baked berry desserts and dried fruit spice cake. Deeper chocolate notes and a toasted nuttiness – almonds and walnuts. Strong, tannic oak with clove, vanilla extract, hot-ish cinnamon, a hint of coriander, and a touch of pepper. Adding a little water does nice things here, toning down the heat and giving all that dark fruit, cocoa, and spice more room to express themselves.

The Finish:  Chocolate-y, tannic oak and spice notes, vanilla, burnt almonds, and clove hang around for a while.

Thoughts:  This is damn good stuff. The sherry influence is definitely there, and is integrated nicely, adding a lot of fruity complexity and balancing spice. At times this drinks a little younger than 17 years old, but the bit of heat on both the nose and palate doesn’t get in the way much. I enjoyed the progression from the somewhat lighter, fresher nose to the darker, earthier palate which gets even better with a little water. Ben Nevis’ Highland character worked quite well with this ex-sherry cask. Recommended.